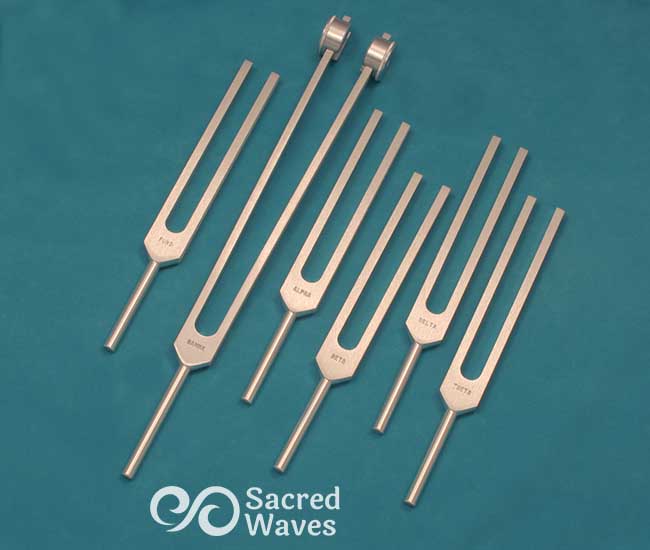 Our Brain Tuners are designed to influence brainwaves, and help induce a variety of desired mental states. They are based on brainwave studies using electroencephalography (EEG) technology, which measures electrical activity in the brain. EEG tests establish that the brain emits five measurable brainwaves.These oscillating waves, from low to high frequency, are Delta, Theta, Alpha,Beta and Gamma. The frequency of brainwaves is measured in hertz (Hz), also known as cycles per second. Specific frequencies correspond with various states of mind, as follows:

Because the brain can shift states based on external stimuli, we can influence brainwaves with external vibrations, and thus change one’s state of consciousness.

There is a natural tendency of waves to influence each other and become increasingly synchronized. We see this in many physical and biological systems, including the brain. When the brain is exposed to a specific wavelength, it will tend to synchronize with it. This synchronization is called brain entrainment.

When the brain hears two different frequencies, one in each ear, its predisposition to entrain compels it to integrate the two tones, creating a third, unique oscillation called a binaural beat.

The Fundamental Brain Tuner tuning fork is paired with a Delta, Theta, Alpha, or Beta tuning fork. The difference in oscillation between the two tuning forks creates a binaural beat which is interpreted by the brain as a third frequency. This frequency gently influences the brain into a different state of consciousness.

The Brain Tuner STD Set contains 5 standard forks and 1 weighted Gamma Fork. The Fundamental Fork is used in combination with a second fork to create a binaural beat, effectively inducing differing brain states and different states of consciousness. The Weighted Gamma Fork is used by itself, and vibrates at 40 Hz.

EEG Rhythms and Their Corresponding States of Consciousness

Delta state, at about 3 Hz, is associated with deep restorative sleep, long trains of thoughts about nothingness, and energy without form. When in delta, we access our Source, the Universal Energy Field, and revitalize our mind and body with its energy.

Theta state, at about 6 Hz, is the elusive twilight state which we access fleetingly as we transition from the depths of delta upon awakening, or as we drift off to sleep. Waking dreams and vivid imagery evoke flashes of memory and intuition. Theta corresponds with REM dream states, meditative states and trances. Here, we’re receptive to information beyond our usual conscious awareness. It’s considered the gateway to learning and memory.

Alpha state, at about 11 Hz, is a state of deep relaxation. In this state of quiet alertness, we can access the wealth of creativity lying just out of reach of our conscious awareness. This state encourages visualization and introspection, and serves as a gateway into deeper states of consciousness.

Gamma state, at about 40 Hz, is associated with peak mental and physical performance. Gamma waves can range from 30-100 Hz, and 40 Hz is considered the best frequency for increasing focus and slightly elevating I.Q. The gamma state can enable simultaneous processing from different areas of the brain, maximizing sensory perception. When Gamma is high, it helps with vivid and rapid memory recall. Only a still mind can access this subtle state, which is associated with perceiving and understanding the Unity of Consciousness.

All of our high quality tuning forks are Made in the USA. Each fork is triple tuned for accuracy of +/- .25% Hz. A protective velvet pouch is included. Complete set of 6 comes with a small Rubber Activator.